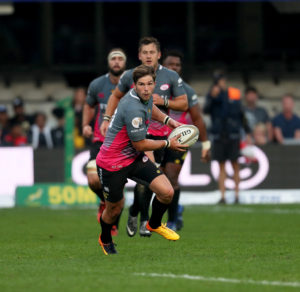 The Steval Pumas travelled to Durban to play the Cell C Sharks in their second game of the Currie Cup Premier Division and was beaten 29 - 0.

Early play was patchy, if impassioned, as both teams had their attacking game interrupted by handling errors, and effective defence.

The Cell C Sharks opened the scoring with a Curwin Bosch penalty in the 5th minute, 3-0, but after that, the game would remain scoreless for the rest of the first half.

The Cell C Sharks seemed to suffer the after-effects of their bruising Super Rugby quarter-final, while the Steval Pumas couldn’t maintain the momentum generated by their win over the Xerox Golden Lions last weekend.

The second half started with an exchange of penalties at the breakdown, eventually leading to Lukhanyo Am scoring for the Cell C Sharks. Curwin Bosch converted, 10-0.

Both sides started ringing the changes around the 50-minute mark, and the Steval Pumas tried to step up their game to attack the 17-point deficit, but again, these efforts were undermined by handling errors.

Following an exchange of turn-overs, Kobus van Wyk, on debut, would eventually crash over in the corner for the Cell C Sharks. Bosch missed the side-line conversion, 22-0.

The Cell C Sharks kept up the pressure, and some deft handling in the backline eventually sent Jeremy Ward over under the posts, securing the bonus point. Bosch converted, 29-0. 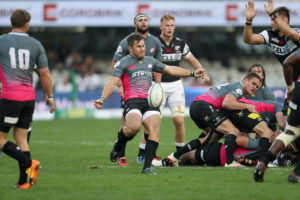 The Steval Pumas attacked strongly in the final minutes, but the Cell C Sharks defence denied them the chance to score.

The Cell C Sharks ran out 29-0 victors.
Steval Pumas coach Brent Janse van Rensburg said the Sharks are a very physical team and they thrive off momentum.
“I was very encouraged by the effort of the players. The players really put their bodies on the line. They stopped a lot of the Shark’s momentum. Unfortunately, we had very little ball in the game. When you have to tackle that much, there is only so much you can do in the game. It emptied our tanks and depleted our energy quite a bit.”
The coach said that in the second half their managing of the game cost them.
“The momentum changer was when we kicked in the second half off the lineout. We did not have a chase line, we tried to run the ball out of our own 22 and forced it, and that resulted in a turnover ball from which they scored from. We lost two vital lineouts in the game, one off their try line in the first half and in the second half as well which they went to score from. On the counter attack in this game, we tried to force it at times and run the ball wide when we had no numbers and lost the ball in the breakdown. The sharks scored from that as well,” said Janse van Rensburg.
He said that unfortunately the players conceded some turnover ball tries because in their decision making with ball in hand of when to run and when to kick, it just wasn’t good in the second half.
“These are basic errors, soft moments, that against a team like the Sharks, proved to be costly. We made it a bit easy for the Sharks in the second half. I think the score line flatters them a bit, they got life off our mistakes. This is life, this is rugby. I believe we can build on this” said Janse van Rensburg.