No quarter given for Steval Pumas 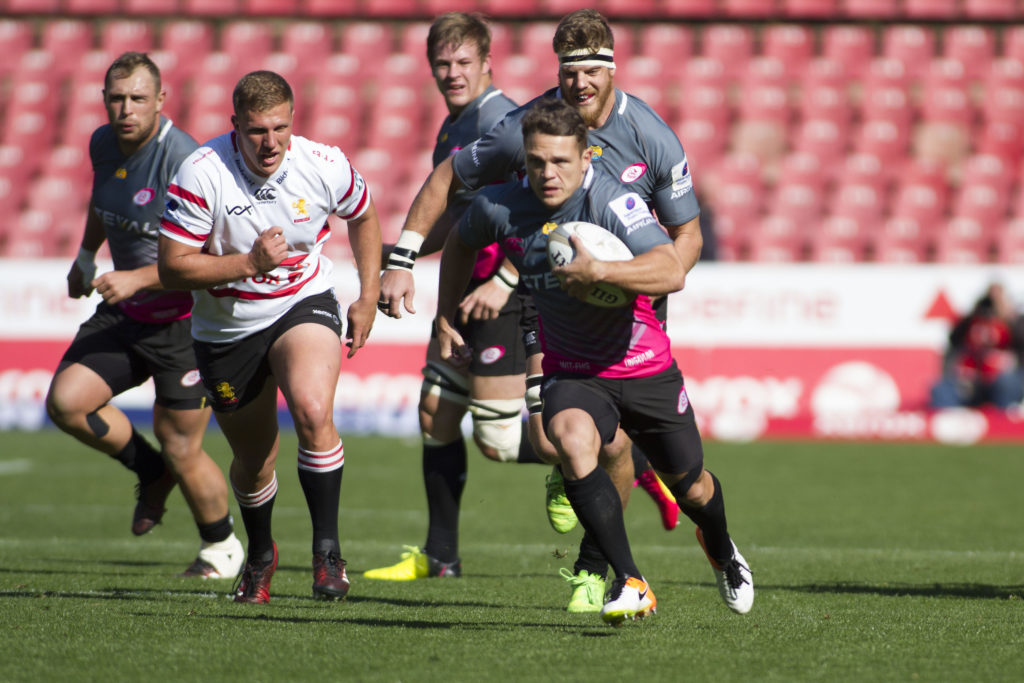 Reynier van Rooyen scored a well worked ball from line out to score a try in the 9th minute
Photo: Johan Nothling

The Steval Pumas took to the field for their quarter-final against the Xerox Golden Lions in the SuperSport Challenge Rugby Series as the best-finishing 3rd placed team across all the groups.
They got off to a dream start when Nardus van der Walt broke the Lions line after taking a pass at full-chat and scored a try in the second minute, converted by Kobus Marais, 0-7.

The Xerox Golden Lions did not take this lying down, and took the ball thru several phases until Dillon Smit caught the Steval Pumas napping with a quickly taken penalty and scoring a try in the 6th minute, converted by Shaun Reynolds, 7-7.

Emile Temperman and Tazz Fuzanni clashed heads in trying to prevent the try and had to leave the field for medical attention. Fuzanni was replaced after suffering a broken left arm, while Temperman failed a concussion test.

4 minutes later, Temperman’s replacement, Reynier van Rooyen, took a well-worked ball from a line-out and sprinted in for a try. Kobus Marais converted, 7-14.

The Steval Pumas won a penalty following a line-out infringement by the Lions, Kobus Marais scored, 7-17.

Shaun Reynolds returned the favour in the 22nd minute to bring the score to 10-17.

Play continued, with a resurgent Lions side taking the ball thru 13 phases before Madosh Tambwe went over on the right. Shaun Reynolds was back on target, 17-17.

The Lions maintained this attacking pressure from the restart and eventually won a penalty close to the Steval Pumas line. Dillon Smith tried to catch them off guard by taking it quickly again. His darting run was stopped by the trailing leg of Francois Kleynhans, who saw yellow for his efforts.

The Lions took advantage of the one-man advantage by scoring a set-piece try straight off the training ground from the resulting line-out. James Venter scored and Justin Ackerman converted to make the half-time score 24-17.

In testament to the bruising nature of this encounter, Justin van Staden took to the field at the beginning of the second half, replacing the concussed Kobus Marais.
The Xerox Golden Lions came out on the front foot and opened the scoring with an unconverted try scored by Jarryd Sage, 29-17.

Justin van Staden pulled back 3 points for the Steval Pumas 5 minutes later as he kicked a penalty, 20-29.

Some trademark mauling by the Steval Pumas set the platform for a Frank Herne try on the hour mark, the conversion sailed wide, 36-25.

The Steval Pumas were not going to go home wondering and launched attack after attack at the Lions’ line, only to be rebuffed by a combination of resolute defence and one or two unfortunate handling errors.

By the 72nd minute, however, this flood of pressure became unstoppable and Frank Herne scored his second, Justin van Staden added the extra two points, 36-32.

The quarter final was now finally poised, with the momentum favouring the Steval Pumas.
A 22 drop-out from the Steval Pumas went directly into touch. The Xerox Golden Lions elected to go for the scrum on the 22, allowing Jarryd Sage to score his second.
Shaun Reynolds converted, 43-32.

The Steval Pumas restarted as quickly as possible and took the game well past the full-time hooter.
At this point, they were playing for sheer pride and did their supporters proud.

The Xerox Golden Lions ran out victors at 43-32.
Steval Pumas coach Brent Janse van Rensburg said the team played their hearts out today.
“All round it was a good performance by the players. They fought back really hard in the second half which was encouraging to see. Up until 4 minutes left in the game, we were 4 points behind. It was still game on and an opportunity for the players. Unfortunately, a direct kick off resulted in 7 points for them. It was a good game to watch for all,” said Janse van Rensburg.
SCORERS