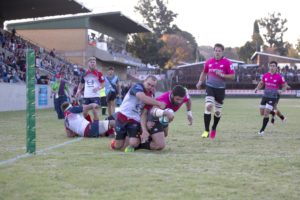 Carel Greeff scored two tries in the clash against the Falcons at the Bosman stadium in Brakpan today.
Photo: Johan Nothling

From the time they kicked off their 4th round SuperSport Rugby Challenge match against the Hino Falcons at the Bosman Stadium in Brakpan, the Steval Pumas knew they were in for a challenge.

The Hino Falcons took an early lead thru a 5th minute penalty, 3-0, before Frank Herne scored an unconverted try 6 minutes later, 3-5.
Another early penalty allowed the Hino Flacons to retake the lead, 6-5, before Ruwellyn Isbell scored on the half hour mark. The conversion wasn’t successful, 6-10.

The Hino Falcons showed why they are so highly regarded in this competition by soaking up the early pressure and responding with two late tries towards the end of the first half.
They were both converted to allow the Hino Falcons to go in at half-time leading 27-10.

Coach Brent Janse van Rensburg’s team-talk obviously worked, as the Steval Pumas started the second half on the front foot, leading to a De-Jay Terblanche try in the 45th minute. Again unconverted, it would take the score to 27-15 before Terblanche made way for Kwezi Mona in the first of several tactical changes.
Kobus Marais made way for Sias Ebersohn, Jannie Stander replaced Stephan Greeff, and Marko Janse van Rensburg took over from Frank Herne.
Within minutes Carel Greeff scored a try and Sias Ebersohn converted, 27-22.
While the Hino Falcons were still recovering, JP Lewis went over in the corner, handing Ebersohn a tough conversion, which he slotted, 27-29.

After losing a player to the sin bin for taking out a Steval Pumas player in the air, the Hino Falcons regrouped to score a converted try, 34-36, before a yellow card was shown to Ryan Nell for a dangerous tackle as the game continued with 14 men apiece.

The game ramped up to a dramatic finale as the Hino Falcons scored a late try, 41-36, only to have it answered by Carel Greeff’s unconverted try.

The umpire’s final whistle would bring this all-action encounter to a close at a 41-41 draw.
Steval Pumas coach Brent Janse van Rensburg said the team gave away too many soft tries and had a lot of catching up to do in the second half.
“Just too many soft moments. Our decision making wasn’t good, we ended up losing a lot of ball in hand that put us under a lot of pressure and we just weren’t patient with the ball in hand, chucking unnecessary passes around. In our attacking breakdown, we lost a fair amount of ball, which resulted in us standing under our posts and having to play catch-up rugby. Missing basic 1 on 1 tackles too gave away easy tries. In the second half, we outscored them but unfortunately we kicked the ball away unnecessarily at times, gave possession away and that made it difficult to put more points on the board and to close the game out.,” said Janse van Rensburg.
However, the coach is looking forward to next week’s match and says he is positive that the team will get better and keep going.
SCORERS:
Pumas: Try: Frank Herne (1), Ruwellyn Isbell (1), De-Jay Terblanche (1), Carel Greeff (2), JP Lewis (1), Devon Williams (1)
Conversion: Sias Ebersohn (3)
Falcons: Try: Mamus Erasmus (1), Andries Schutte (1), Friedle Olivier (1)
Conversion: Warren Potgieter (3), Shane Kirkwood (2), Friedle Olivier (1), Christian Rust (3)
Penalties: Warren Potgieter (2)