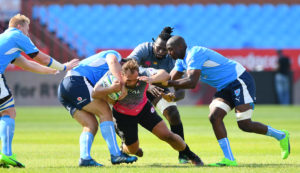 Marko Janse Van Rensburg scored the first try for the Pumas in the match against the Vodacom Blue Bulls
Photo: Johan Rynners

For the kick-off of the Super Sport Rugby Challenge 2017, the Steval Pumas travelled to Pretoria to take on the Vodacom Blue Bulls at Loftus Versfeld.
Coach Brent Janse van Rensburg’s back-to-basics approach manifested in the match and translated to the scoreboard, giving the Steval Pumas a 31-23 win.

Kobus Marais slotted a penalty after 5 minutes to give the Steval Pumas an early lead, but the Vodacom Blue Bulls replied with two penalties within 5 minutes to take a 6-3 lead.
Seven minutes later, Kobus Marais again split the uprights to level the scores at 6-6.
It took the Vodacom Blue Bulls another 13 minutes before they could score, and convert a try to take the score to 13-6.
Fortunately, Marais brought his kicking-boots and added another Steval Puma penalty just before half-time. The teams went into the shed at 13-9.

Whatever the coach said to his charges at half-time, had the desired effect. Four minutes into the 2nd half Marko Janse Van Rensburg scored a try for the Steval Pumas. The conversion sailed wide but the Steval Pumas regained the lead at 13-14. The Vodacom Blue Bulls hit back with a successful penalty 5 minutes later for 16-14, before they would score a converted try with 20 minutes to go.
Three minutes later, Rabs Maxwane received a yellow card for a spear tackle on Frankie Hern. To prove he’s not one to hold a grudge, Frankie scored a try a minute later.

With 10 minutes to go, the Steval Pumas made the one-man advantage count with two quick tries. The Steval Pumas took the lead by 8 points, securing the final score of 31-23.

A much improved second half performance would allow the Steval Pumas to run out as deserved winners and give them the perfect start to their Super Sport Rugby Challenge 2017 campaign.

Steval Pumas coach Brent Janse van Rensburg was happy with the win but said there is a lot of work they still need to do and the players have to remain hungry to seek continual improvement.

“We didn’t have any ball in the first half, we defended a large amount of the game and that sapped the energy levels a bit close. We knew that if we could hold on, we would be in on it. We lost some vital lineouts in key areas of the field that put us under some pressure,” said Janse van Rensburg.

However, in the second half the team adapted their plan a bit and the guys stuck to the end.

“I am very happy with the work ethic and the energy in the second half. They fought to the end and pulled the game through. Obviously, an away game win against the Bulls at Loftus by 5 points is important and certainly helps in the competition going forward,” said Janse van Rensburg.

The Steval Pumas will play against the Golden Lions in KaNyamazane on Saturday, 29 April. Kick-off is at 3pm. Be sure not to miss this one!