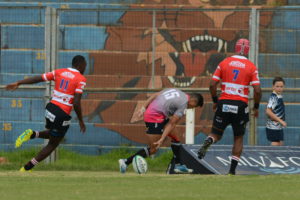 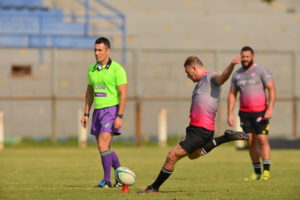 Lions squeak through against Steval Pumas

The Steval Pumas and the Xerox Golden Lions got the rugby season underway with a cagey warm-up match which eventually saw the Johannesburg outfit squeaking to a 19-16 victory at Witbank Stadium on Saturday.

With both sides eager to make the most of their first chance to prove themselves in a match situation this year, the first 15 minutes remained scoreless, before the Lions went over in the 19th minute for a converted try. The Steval Pumas replied with two penalty kicks from Kobus Marais, but there was no further scoring in the first half as the Lions went into the changerooms with the slimmest of leads.

Marais was on song with the boot again to take the Steval Pumas ahead after 51 minutes, and five minutes later Devon Williams extended his side’s lead with a beautiful running try, converted by Marais. The Lions fought back hard and closed the gap to two points going into the last quarter, with a converted try taking the score to 16-14. An unconverted Lions try in the 66th minute proved to be the decisive moment. A rainy last ten minutes dampened the flow of the game and the visitors held out for victory against a worthy opponent in the Steval Pumas.

Steval Pumas coach Brent Janse van Rensburg said that some uncertainty was to be expected from the first match of the season.

“We didn’t quite execute everything that we wanted to and it was a bit of a scrappy affair, but we aren’t too concerned about it. At the end of the day it was a very closely fought match. We’ve now got a good idea of the things to work on for next week and going into the SuperSport Challenge, but we feel like we’re starting to build some good momentum to take forward,” said Janse van Rensburg.

Next up for the Steval Pumas is another warm-up match against Western Province at Newlands next Saturday, where the men from Mpumalanga will have another opportunity to further their preparations for the SuperSport Challenge at the end of April.