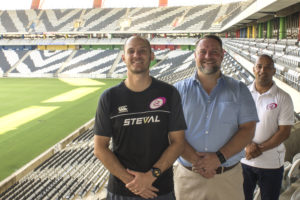 The Steval Pumas have cemented their reputation as one of the top rugby franchises in South Africa, with their inclusion in the new Currie Cup Premier Division format announced by SA Rugby last Friday.

The Currie Cup is returning to a more intense, strength-versus-strength format this year following a decision of the SA Rugby Special General Council in Friday. The Premier Division is contracting from nine to seven teams, including the top six sides from last season, and the Steval Pumas, who had the best record of the remaining teams over the past five years.

Mpumalanga Rugby Union CEO Pieter Burger said that the team is humbled by the opportunity to once again participate in one of the oldest and most prestigious rugby competitions in the world.

“There’s been a huge amount of improvement over the past several years and we are grateful to have received recognition for that. We’ve never wanted to be seen as a team that’s just kept in a competition for good graces, that’s never part of our dreams and aspirations. We want to consistently drive ourselves to be better, beat some of the bigger franchises and continually grow,” said Burger.

Burger added that the much-anticipated decision was healthy for the psychology of players, staff, supporters and sponsors.

“There has been some uncertainty about whether we would be in the Premier Division so this decision is extremely important from a playing, coaching and commercial perspective. A lot of players are attracted to the Pumas because we’ve become known as a very good union which advances careers. This decision therefore continues that attraction,” Burger said.

The Currie Cup Premier Division will kick off on 12 August. First up for the Steval Pumas is the SuperSport Rugby Challenge, a revamped version of the Vodacom Cup incorporating the north, south and central divisions. The exciting new format will include televised Sunday rugby festivals at community stadiums and clubs, as well as triple headers and regional championships. Before the competition kicks off at the end of April, the Steval Pumas will prepare with warm-up matches against the Lions, Western Province and the Sharks.