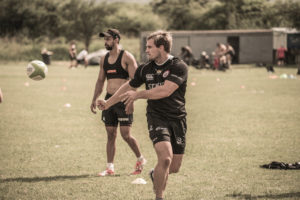 Schoeman leaves on loan to Stormers

The Steval Pumas would like to announce the temporary departure of Marnus Schoeman, as the talented loose forward decides to take an opportunity to play Super Rugby for the Stormers on a loan agreement.

Schoeman (28) has been an integral part of the Steval Pumas squad since his debut at the start of the 2015 season, having scored 16 tries in 29 appearances for the Mpumalanga side. The flanker was unlucky to have missed selection in 2016 due to injury concerns. He is still contracted with the Steval Pumas and is scheduled to make his return on 1 June after his loan spell with the Stormers.

“We will obviously miss Marnus as he is an exceptional player who has been of great value to our side. The union invested heavily in his rugby development and he continues to play an integral part of our plans for the future: we look forward to welcoming him back into the squad,” said Mpumalanga Rugby CEO Pieter Burger.

“For now, however, we want to wish him every success for this opportunity to play for the Stormers. We are excited to see the contribution he can make on the Super Rugby stage,” said Burger.

The move again illustrates that the Steval Pumas are a franchise producing a steady stream of world-class players with the potential to perform on the biggest stage.

“These type of things aren’t just a stroke of luck. We are consistently producing quality players and hope to soon be seen as equal partners on the franchise level,” Burger said.

Schoeman, who has already moved down to Cape Town to join the Stormers in time for a once-off warm-up game against the South Western District Eagles this weekend, said that he is eager to prove himself.

“Obviously, it is every player’s dream to play for the Springboks, and Super Rugby is the stepping stone to this. I really want to make the best of the opportunity during the prime of my career,” said Schoeman.

Schoeman confirmed that he is still committed to the Steval Pumas.

“My time with the Pumas has been fantastic and I don’t see returning as a step back for me at all. The new coach Brent Janse van Rensburg is installing a whole new plan and culture, which I really look forward to being a part of,” he said.