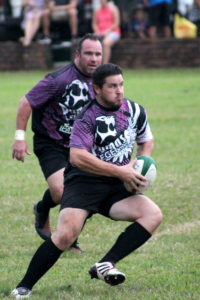 To kick off the 50th anniversary of Malelane Rugby Club, around 500 spectators turned up at the rugby club on Friday afternoon for the first round of matches between school and club sides. Lowveld High, Malelane Ou-Olifante, the Middelburg XV and the Malelane XV were all victors in a set of closely-fought encounters.

Saturday’s action-programme attracted more than 2000 supporters, as clubs from across Mpumalanga battled it out before the big match between the two Legends sides. The match was the first time the SA Legends side played in their new J9 jerseys in honour of Joost van der Westerhuizen. A minute’s silence was observed before the start of play for the late Springbok hero.

Despite stiff competition in the SA Legends team from Wim Visser, John Mametsa, Kennedy Tsimba and Werner Cronje, the Pumas Legends came out tops with four converted tries against the SA Legends’ one. The crowd gave their whole-hearted support to former Pumas stars such as MJ Mentz, Corne Steenkamp, Jaco Bouwer and Doppies le Roux.

“The match was played in very good spirit and it was amazing to see the support on the day. We would like to give a big thank you to SA Legends, Mpumalanga Rugby, the Malelane Rugby Club and all the sponsors for making such a unique event for the province possible,” said coach Stonehouse, who is on holiday in the Lowveld before he returns to Japan to coach Toshiba Brave Lupus.

The Malelane Rugby Club and the SA Legends also voiced their appreciation for the event’s sponsors and the various teams and supporters who made the weekend a success.

Photo: Morne Kruger and Dewald Pretorious in Malelane playing for the Pumas Legends